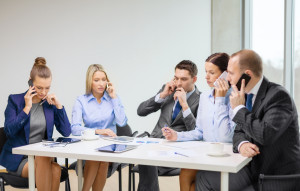 More and more business-owners are relying on their smartphones to conduct business these days and as you can imagine, there are a million apps for that! But how do you know which ones will actually help you run your business effectively? To get you started, here are three that every small- and medium-sized business owner should look into for their iPhone.

With this app, you simply use your iPhone camera to take a picture of a document and scan it into an PDF file. Once you take the picture of the document, you simply mark where the corners are and the app does the rest of the work for you. You can then email the PDF file to anyone who needs to see the document.

If you’re looking to sync your iPhone to Microsoft Exchange in a secure environment, this is the app for you. While iPhone normally supports Exchange, this app offers some added security. Features include the ability to keep data exchanged over a network encrypted and the ability to access your email, contacts, and calendar over a secure connection. It’s a great way to keep your company protected.

For less than a dollar, this little app allows you to record outgoing calls. Ever forget what was discussed during an important phone call? This app can record for hours and provide you with the opportunity to play those calls back over and over again. You can also record voice memos. The best feature of all is that you can send those recordings via email to anyone. So, if your business partner missed an important call or a customer can’t remember what you told them, all you have to do is send them the entire phone conversation.