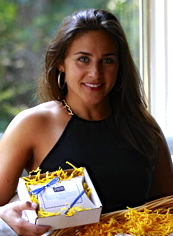 Whether personal or professional, maintaining relationships requires a good amount of time and effort. Just as with personal relationships, it is important to be mindful of the business relationships we foster on a daily basis. If you take your spouse for granted or fail to make them a priority, it’s not likely to pay off for your marriage. The same is true of maintaining client and associate relationships. If it is an important relationship that you want to keep for years to come, than a little appreciation and recognition goes a long way.

This was the line of thinking that motivated entrepreneur Nina Meranus to start her online company SurprisesByMail.com in 2011, under the simple belief that “the world is a better place when people do nice things for each other”. In 2012, the small business saw a lot of growth as co-founder Andy Sheeks joined the team and the company grew to service all 50 U.S. states as well as Canada. In 2013, the company projects continued growth as they build their reputation as the go-to-site for personal and professional gifting.

SurprisesByMail.com makes corporate gifting easy, inexpensive and it’s a great way to make a personal connection with clients. Thoughtfulness and small acts of kindness go a long way in building lasting relationships. Sending a thank you for years of service, congratulations at a company millstone, kind words during times of personal loss and suffering or even just to say “get job” shows your client or employee that you care not only about their business, but about them. The simple truth is that people like working with people that they like and the more you work at improving professional relationships, the better they will be.
Small businesses know just how important good employees are – they are the lifeblood of your organization. SurprisesByMail is also a great way to show your employees how much their hard work is appreciated.

SurprisesByMail.com offers gift boxes that can be filled with your choice of goodies (like chocolates, fudge, baked goods, nuts, dried fruit, pretzels and even gift cards) and customized with a personalized message, image and company logo. It’s a great way to thank clients for a new customer referral, send appointment reminders or re-engage a stagnant or dormant account. SurprisesByMail.com allows companies an outlet for sending clients a visual reminder of their brand and how much their business means.

I have used the same auto-mechanics since 1986 when my wife and I arrived in Cincinnati. The two men, I‘ll call Dan & Dave are famous for giving courteous, excellent, and honest service. Furthermore, they don’t “go looking” for problems, but point out any need for maintenance, but you as the customer always feel in control. I was bragging about them to a friend who was telling me about his excellent auto mechanics, and we found out we were talking about the same place!

These guys know more than just about cars. They know a good deal about business. I found this out when my son total my Toyota Echo, and I started looking for a car with the settlement money. Wow, what a nightmare dealing with used car lots, and I am not talking about the large auto-mall type dealer, I am talking a couple of tiers down. I finally blurted out to Dan and Dave do you guys have anything? They said, “actually we do.” We take cars from time to time and fix them up to sell, but we’re not really looking to make much money off them. What we are really doing is keeping the guys in our shop working during some slow times. That way they keep their hours (and pay) up, and we don’t have them out looking for a new employer. It costs a lot to recruit, test out, and retain a good employee. If that guy walks for a better deal, it hurts our shop. Plus it keeps good customers coming back to us when they know we’ve serviced a certain car for years.

This is pure HR-PR genius! By treating everyone right: their customer, their employees, and themselves, Dan & Dave have created a win-win-win scenario! They balanced HR with PR. There’s an old saying, “what goes around comes around.” I truly believe in business this is a basic fundamental truth. Dan & Dave have been doing it right for a long time, and it is no coincidence that their lot is always full of cars and their office full of satisfied customers.

There is an old campaign slogan that says “You never get a second chance to make a first impression.” That is a very true statement and an important rule for selling just about everything… including yourself!

You wouldn’t meet a new client in ragged jeans and a sweatshirt or wear the same outfit two days later for a first date, or, at least I hope not. Your online image is just as important as meeting someone in person, probably even more so. Let me explain… when you upload an image to the internet it’s presence gets picked up by spiders that reports new content to search engines. In other words that image becomes searchable. This is just one of many issues in regards to using images. I have decided to compile a useful list of things to think about when you are posting images on the web.

1. Don’t upload any images that you would not want your boss, clients or mother to see. – Think twice before you post that crazy picture of you passed out in a dumpster after a night of partying, even though you might post this picture using an alias, if you registered your alias anywhere on the net with your real name, search engines could index both names together so your image of you in all your glory, could pop up in a search, which doesn’t exactly portray the image of someone trustworthy.

2. As I said before, first impressions are very important so consider your profile images. I am going to use a dating site as an example, with so many great digital cameras out there that are affordable and easy to use there is really no reason to upload that old Polaroid picture of you from prom in1982. Smudging out the face of the girl that you were with makes it look even worse. Taking the time and effort to put up good quality images shows that you are considerate of the image you put out and that reflects the effort that you are going to put into a personal relationship or the relationship with your clients.

3. You can make a large picture smaller but you cannot make a small picture larger – Images are usually uploaded in a JPEG format. This format is designed to compact information in your image and editing and re-editing can degrade the image. When you make an image smaller it throws information out so when you go to enlarge it again it cannot replace the information lost so it begins to pixelate and pull the image apart making it look fuzzy or distorted. Save your pictures in three’s, one original burned on a CD to preserve the image, the second in a large format (300 dpi) for printing or creating new files to edit, and third a smaller (72dpi) image for the web. This one you also want to burn on a disc because the more you work with it the more degraded it can get.

There are many free editing tools that come with most operating systems or can be downloaded from the web that are easy to use that you can adjust color, crop, and touch up or ad a little art. So with a little time and effort you will always put your best foot forward. Quality shows it what you see so regardless of whether it is working to draw in a mate or a client make sure it works in your favor.