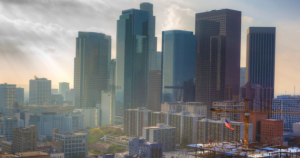 Whether you’re in the startup phase or a long-established company, the Small Business Expo has the right resources for you. They’re the nation’s largest business-to-business expo, and they’ve made it their mission to help small business owners and entrepreneurs achieve their business dreams. Their free, one-day expo offers invaluable insights and exclusive networking opportunities with a wide range of business-critical workshops, seminars, and presentations from top industry experts. If you’re looking to drive your business forward and take the next step to success, join them this year at their Los Angeles expo location for this can’t miss event!

Why Should You Attend?

Are you looking attend this year’s event and searching for hotels in the Los Angeles area? The Small Business Expo site has a list of travel accommodations, including parking options for the event. The site does offer discounts as well!

If you’re looking to register for this year’s event, registration is still FREE for the Los Angeles location!

PizzaRev Set to Heat Up the U.S.A.  With its Fast-Casual “Craft Your Own” Custom Pizza Concept

LOS ANGELES, CA (August 14, 2013) — PizzaRev has announced that their LA-based custom pizza concept will enter the franchise arena as part of its strategic growth plan. “We will continue to rapidly expand our corporate-stores, and we are excited now to offer others the opportunity to participate in the PizzaRev story. We have been steadfastly focused on honing our model for the past year, and now are positioned to achieve our long-term goals while satisfying the high-quality franchisees we intend to engage,” stated PizzaRev Co-CEO Rodney Eckerman. PizzaRev has hired an industry leader, Mark Lyso – CFE, to spearhead their Franchise initiatives. Lyso was most recently Director of Franchise Development for Sizzler USA, and he joins the PizzaRev team as Vice President – Franchise Development. “Mark’s insight and past experience in the industry, which includes his expansion of the “Famous Dave’s” franchise from 2 to 175 units, will be invaluable to achieving our growth goals.”

PizzaRev burst onto the scene in Los Angeles and quickly earned rave reviews from fans and critics alike for its unique format, which empowers guests to build their own custom pizzas, choosing from PizzaRev’s vast selection of sauces, cheeses, and toppings for one affordable price. “We have filed to franchise in all 50 U.S. states, and our goal is to partner with experienced multi-unit franchisees who share our vision for the PizzaRev brand,” stated PizzaRev Co-CEO Irv Zuckerman.PizzaRev opened in El Segundo, CA earlier this month and opens its newest corporate store in Oxnard, CA this week with additional LA-area locations currently under development in Burbank, Van Nuys, Bakersfield, Thousand Oaks, Camarillo, Los Angeles and Westlake Village coming in 2013 and 2014. Nominated for “Best Pizza in Los Angeles” by CitySearch, PizzaRev has earned one of the highest Yelp ratings of any pizza restaurant in LA. “PizzaRev is a truly interactive dining experience. Starting with our made-from-scratch dough, everything you could want on your pizza is displayed right before your eyes and crafted to your personal preference. Once your pizza is just right, it goes in our revolutionary open-flame stone-hearth oven and emerges perfectly cooked in less than three minutes,” explained Nicholas Eckerman, PizzaRev’s Chief Operating Officer.

PizzaRev is poised to continue its growth in the community and outward with its new partner Buffalo Wild Wings Inc., which earlier this year announced an equity-investment in PizzaRev. “Buffalo Wild Wing’s investment recognizes PizzaRev as a leader of an emerging restaurant concept with high growth potential,” said Kathy Benning, Buffalo Wild Wings Executive Vice President of Global Marketing, Brand and Business Development. “Along with chicken wings, pizza is one of America’s most popular foods and we believe that PizzaRev has great potential for continued growth and we are excited to see PizzaRev begin their franchise program. “ Sally Smith, Buffalo Wild Wings CEO and PizzaRev board member, recently announced PizzaRev is expanding to Minnesota, stating, “We’re going to open a company owned unit or more in Minneapolis with the goal of opening the first one in the first quarter of 2014.”

About PizzaRev
PizzaRev is a Los Angeles-based fast casual Pizza chain that has reinvented the way America eats its favorite food by presenting a truly interactive dining experience where customers craft their own pizzas choosing from a wide variety of high-quality ingredients, in any amount, for one price. PizzaRev fires its pizzas in a stone-hearth oven which produces a delicious, crispy Roman-style thin pizza in just 3 minutes. With an emphasis on quality and fast & friendly customer service, PizzaRev has earned its reputation for serving Better Pizza from Flour to Fire!

View a short video clip of PizzaRev in action here!