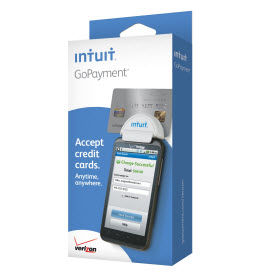 Intuit Incorporated, along with Verizon Wireless, has just announced the release of Intuit’s GoPayment app as well as its pocket-sized credit card reader, both of which will be available in Verizon’s 2,300 retail stores and business-to-business sales channels.

Basically, this means that Verizon has endorsed a competitor to Square, the credit card reader that works in conjunction with the iPhone from Apple. GoPayment is aimed at small-to-medium sized business and is used to process credit card payments on smartphones as well as tablets.

The card reader plugs into the audio jack of your mobile device and then the card can be swiped or manually entered into the GoPayment app. The transaction is immediately processed and funds are deposited into the bank account of the user automatically within a few business days. The app itself is available on Android, Blackberry and iOS devices.

Customers of Verizon can get a free card reader by activating a GoPayment account and then taking advantage of the mail-in rebate for the $29.97 price. If you purchase a smartphone specifically for GoPayment, you are required to subscribe to Verizon’s Nationwide talk plan which starts at $39.99 per month. In addition to that, you will also need a data plan which starts at $30 per month for 2GB of data.

According to Executive Director of Verizon’s Business Solutions Group Mike Schaefer, “Intuit’s GoPayment on America’s most reliable network is a mobile transaction game changer and brings another dimension of must-have technology to the small business community. Payments and transactions are often the biggest hurdle businesses face. Our value proposition is to streamline, simplify and enable business owners to get paid with minimal delay. This collaboration with Intuit is an important part of our strategy to bring the most innovative online and mobile tools to our customers.”

A Copier Rental is a quick way to mass produce important documents for potential customers at an event or conference. Renting office equipment is simple and easy and it can also save you loads of time and money. Rentacomputer.com has been offering copier rentals to more than 1000 cities worldwide for over 20 years.