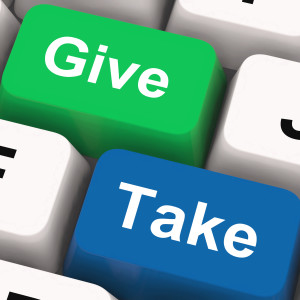 When I started my company, I was absolutely terrified of everything that could go wrong. I could already imagine huge bills for all kinds of services and a dozen lawsuits against me. Since I am not originally from this country and English is my second language, things looked even more difficult to me. What if I didn’t understand what certain laws meant and how would I know if I was breaking them?

I was torn between “taking the risk” or staying in the “safe zone”. In the scheme of things, this comparison becomes ridiculous because at any time you can get fired for doing what you don’t love so why not try doing what you do love.

With that thought, I started my journey into entrepreneurship. Being a newbie, I was naturally more inclined to take (take advice, take direction and, in general, take any help I could get). I have to say that I learned plenty by doing that, but not even close to what I have learned by giving. By sincerely giving.

You can tell by my business, RentBillow, that I am all about the sharing economy. The sharing of resources and the sharing of knowledge included. These are a few tips I have learned since launching my business that I would like to share, especially to new entrepreneurs and people in the media.

1. If you are thinking of starting your own business, try to find a startup to collaborate. You might not like the idea of not getting paid, but trust me, it will save you a lot of money and time once you make the decision to jump in.

2. Volunteer with local entrepreneur and startup events and associations. One mistake I made was not reaching out to local entrepreneurs right away. If I had met other local entrepreneurs beforehand, then asking them for help and advice after I started my own business would not have been so awkward. It’s really hard asking people for help when you don’t have a pre-existing relationship with them.

3. Be yourself. I have noticed that many entrepreneurs change for the worse as soon as they start a business. They become more serious and they stop doing things the way they had before. They don’t want to ruin their reputation as a serious owner, which is fine in a way, but remember to enjoy your pastimes. I personally continued being the same smart-alek on social media as I always was before. Why would I do this? Because if someday I become a known entrepreneur and I say something politically incorrect or offensive, people will say, “Oh yeah, she has always been like that.”

5. If you are in the media, think about all the small fish in this humongous pond. I know it is more appealing to interview a unicorn entrepreneur, but your help can encourage an up and coming entrepreneur to be successful, and they absolutely will not forget you when they reach the level of success of billionaire entrepreneurs.