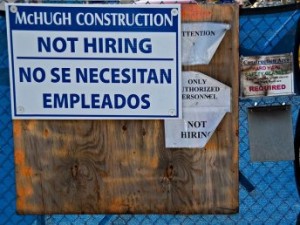 The latest small business employment figures are in and, after several not-so-good economic reports, they suggest that economic recovery is losing ground. The smallest firms in the country cut staff by a very small margin over the past few months, losing an average of 0.04 workers per company, according to the report by the National Federation of Independent Business’ reports.

While that margin isn’t very substantial, especially compared to the 0.11 workers that was reported back in June, it does mark the second consecutive month numbers are in the red after six straight months of flat or increased employment. The NFIB report presents slightly different findings than the ones discovered by Intuit’s latest report. That report showed that small business employment increased 0.17% in June.

Regardless, small businesses are clearly struggling to live up to their traditional billing as our nation’s most powerful job engine. According to NFIB Chief Economist William C. Dunkleberg, “On balance, July looks like a repeat of June, few jobs and no change in the unemployment rate. So far, it has turned out to be a cruel summer of dashed hopes for meaningful job creation.”

To make things worse, less than half of business owners hired or tried to hire new workers over the last three months and 86% of those reported finding few or no qualified candidates for the positions. These results are based on the responses of 1,803 randomly-sampled members of the NFIB.

Only 11% stated that they planned on adding new employees to their payroll in the coming months. Mid-Atlantic and Mountain State businesses are planning on cutting back while South Atlantic and Central states plan on adding employees this year.

The Commerce Department reported last week that the economy increased at a minuscule 1.5% in the second quarter, down from 2% growth during the first three months of the year. This effectively thwarted any hopes that recovery would steadily pick up momentum over the course of 2012.