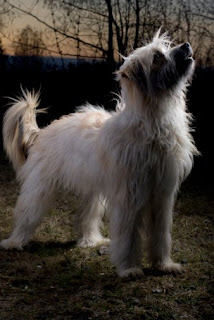 Six years ago Jacki Simoni juggled a flashlight, dog leash, poop bags, and animal repellant before her nightly walk and thought to herself, “There has to be an easier way to do this.” So Jacki set out to rectify the problem and ended up inventing the
PupLight, a light that attaches to the collar of dogs and makes it possible for the dogs to see in the dark.

Jacki has sold quite a few units at 150,000. Her biggest retailer is Petco. Jacki also sells through Amazon.com. While these figures aren’t bad for something she invented for herself, Jacki always thought that her product would sell a little better. Recently, her luck has started to change. Jacki’s product got picked up by the Secret Service to be used on their dogs. Even better, a few weeks back Jacki signed a contract with the General Service Administration, or GSA, worth $125,000 and making Jacki able to offer her product to over 1,000 different government departments.

“The process that Jacki had to go through is thorough and substantial. The federal government evaluates the product offering and then negotiates for best pricing from the company,” said Rita Haake, program manager of the Center for Entrepreneurship at the College of DuPage in Illinois, who helped Simoni with her GSA application.

All Jacki has to do is contact government agencies that use dogs and see if they are interested in her product, and then they negotiate for a price they can both agree on. Considering that the PupLight was originally for herself and her two golden retrievers, Jacki Simoni has created a product that can potentially help service dogs, drug dogs, and cadaver dogs do their job to the best of their ability.

Jacki had to do a lot of research for her product to make it work for all dog breeds. Poodles had different necks than dachshunds, and those dogs were infinitely different from something like a Saint Bernard. After 15 prototypes, Jacki had a product she was happy with and made her canine customers happy as well. The PupLight gets rave reviews from its users, and the Petco gave it four out of four stars. Jacki built her